The Bridge Street Corridor is Dublin’s centerpiece. Dublin’s historical and cultural heart is strengthened and balanced by highly walkable districts and neighborhoods on both sides of the Scioto River. Exceptional green spaces preserve the outstanding natural features in the corridor and seamlessly connect each unique district along the corridor.

The Bridge Street Corridor radiates a diversity and vitality that mark it as a special place not only within Dublin, but within the region, nation and world. 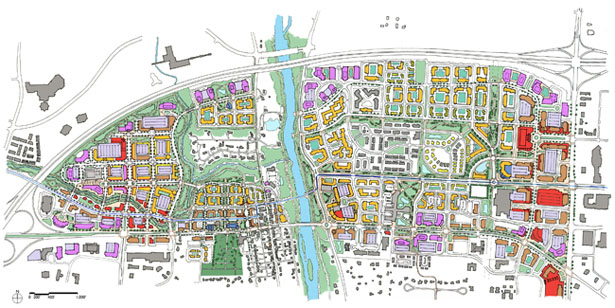 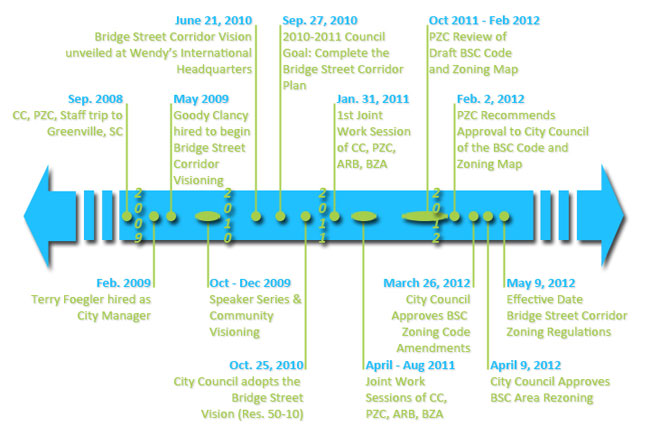 The Bridge Street Corridor Plan establishes a vision that reinforces the City’s long-term fiscal health and sustainability, and promotes competitiveness and market adaptability by creating new living environments and amenities that will attract and retain the next generation of employees and businesses to Dublin. The Plan envisions a vibrant and walkable center of the city, with a dynamic mix of land uses and housing that is integrated with the natural wonders that tie the corridor together. City staff and the consultant teams are excited to continue working with City Council, Planning and Zoning Commission, Architectural Review Board, and Board of Zoning Appeals on completing the implementation studies in 2011 and working together to realize the City’ s vision for the Bridge Street Corridor.

City Council, Planning & Zoning Commission, and City staff visited Greenville, South Carolina. The purpose of the trip was to see a community that demonstrates many of the principles and design objectives of the 2007 Dublin Community Plan that would eventually be incorporated into the Bridge Street Corridor. Specific projects in Greenville include an award winning, innovative pedestrian bridge that was part of the city’s riverfront development, which included a healthy mix of residential, office, and retail/restaurant uses. The city’s Main Street streetscape, extensive public art displays, several historic districts, and new downtown housing were also visited. Following the trip, City Council and Planning and Zoning Commission members voiced their desire for a unified vision for the center of Dublin. With a number of development proposals in the area in and around the Historic District, a need for a new and better future for the Dublin Village Center site, and exciting possibilities centering around the redevelopment of the OCLC campus, a vision for this key part of Dublin became a priority.

Terry Foegler was hired as Dublin City Manager in February 2009. Mr. Foegler previously served as President of Campus Partners, where he managed the university-led, award-winning South Campus Gateway project and major redevelopment of the OSU campus area. Mr. Foegler had previously served as Development Director for the City of Dublin in the 1990s, and was responsible for negotiating economic development agreements that attracted Cardinal Health, Nationwide Insurance and numerous office developments. Council members agreed that Mr. Foegler’s experience in Central Ohio and in Dublin, partnered with his big-picture perspectives, expertise in planning and economic development, and skill in facilitating public/private development partnerships would be tremendous assets to Dublin’s continued growth and success. Soon after arriving, Terry spearheaded the effort to begin a comprehensive examination of the land use, economics, infrastructure, and redevelopment potential for the Bridge Street Corridor.

To begin this effort, the City in May 2009 engaged Goody Clancy & Associates to manage a visioning study for the Bridge Street Corridor. Goody Clancy is an award-winning, Boston-based firm with extensive expertise in urban planning, historic preservation and development, and had worked with Terry Foegler on the High Street Visioning Study for The Ohio State University. Goody Clancy was also one of the consultants who assisted with the preparation of Dublin’s first Economic Development Strategy in the early 1990s. David Dixon, a nationally recognized urban designer and architect was designated as the project manager from Goody Clancy.

Goody Clancy began the visioning process by interviewing stakeholders in the community and thoroughly reviewing all of the previous plans, studies, proposals and other planning efforts the City had undertaken in the Bridge Street Corridor. Goody Clancy also met with key stakeholders and their respective development teams on an ongoing basis to ensure that all planning efforts were coordinated with the City’s vision for the Corridor.
In addition, a key objective of the Bridge Street Corridor visioning was to develop a better understanding of emerging trends that are expected to have a major impact on development in Dublin, central Ohio, and the nation in the coming decades. Nationally recognized experts on the changing nature of commercial development markets, shifting demographics, and future economic development and employment opportunities were brought to Dublin to share their expert knowledge and understanding of these exciting opportunities with the City, local developers, landowners, business owners, and residents of the Corridor.

On June 21, 2010, at the Wendy’s International Headquarters, the City hosted a standing-room-only meeting of over 150 residents, corporate citizens, members of the development community, and other interested individuals where City Manager Terry Foegler and Goody Clancy unveiled a series of five Vision Principles and an Illustrative Vision Plan for the Corridor. The Principles and Plan were each based on all of the work since May of 2009. Public comment focused on the ambitious and exciting nature of the plan.

Dublin City Council adopted their annual 2010-2011 goals on September 27, 2010. One of the goals included the completion of the Bridge Street Corridor Plan, with several near-term action strategies. The action strategies included holding joint work sessions with the Planning and Zoning Commission, Architectural Review Board, and Board of Zoning Appeals to discuss the next steps to implement the vision for the Bridge Street Corridor and ensure a common understanding of the long-term policy objectives for development and redevelopment in the Corridor. It was around this time that City Manager Foegler left Dublin to serve as Associate Vice President, Physical Planning and Real Estate at the Ohio State University. However, this did nothing to slow the progress of the Bridge Street work.

Dublin City Council adopted Resolution 50-10 on October 25, 2010 adopting the Bridge Street Corridor Vision Report, which included a Vision Statement, the five Vision Principles, and Implementation Strategy as a guide for the future of the Bridge Street Corridor. Subsequent to the adoption of Resolution 50-10, City staff retained consultant teams to conduct the implementation studies, including a Development Code, transportation analysis, and water, sewer, and stormwater modeling.

Joint Work Sessions of City Council, Planning and Zoning Commission, Board of Zoning Appeals, and Architectural Review Board

As part of the implementation strategies for Council’s goals related to the Bridge Street Corridor, a Joint Work Session of Council, Planning and Zoning Commission, Board of Zoning Appeals, and Architectural Review Board was held to allow members to review and comment on the Bridge Street Corridor Vision, discuss shared interests and reach a common understanding of Council’s policy intent and key planning principles for the long-term redevelopment of the Corridor. Council, Board and Commission members were also introduced to the consultant teams managing the implementation studies.

Members of City Council, the Planning and Zoning Commission, Architectural Review Board, and Board of Zoning Appeals held the first joint work session to be updated on the implementation portions of the Bridge Street Corridor plan. The consultant team of Clarion Associates/Farr Associates, engaged to write the draft of a development code, introduced the concepts of a form-based code. The Nelson\Nygaard consultant team provided an introduction to transportation planning in walkable, urban areas and highlighted what would be included in the transportation analysis for the Bridge Street Corridor. The first draft of the development code was distributed to the members and the public, along with a draft zoning map for the area rezoning intended to follow the adoption of the Bridge Street Corridor Development Code. Drafts were also made available through the City’s web page.

A second joint work session of City Council, Planning and Zoning Commission, Architectural Review Board, and Board of Zoning Appeals was held on May 24, 2011 to update the members on the transportation, utility, storm water and fiscal analysis portions of the Bridge Street Corridor implementation studies. Council and Board and Commission members were also provided a revised draft of the Bridge Street Corridor Development Code for review, a summary of the comments received on the first draft of the Code and the subsequent changes, and a summary of other communities with form-based code experience.

After more than a year of review by Dublin Planning & Zoning Commission and two years of public review and input on the Vision Plan, the Bridge Street Corridor Vision Plan is prime for development as Dublin City Council approved (6-0 vote) the new zoning regulations of more than 800 acres of land at the center of the city on Monday, March 26, 2012.

Complete the Bridge Street corridor plan to provide a vision for the corridor, which will reinforce the City’s long-term competitiveness, create a vibrant and walkable environment with types a dynamic mix of land uses and housing types, and that enhances the City’s long-term sustainability.

Conducted by Goody Clancy & Associates – May 2010

This document summarizes some of the more significant emerging trends likely to affect Dublin in the near future, examines some of the community goals related to these emerging trends, identifies the unique opportunities that have emerged to date from the planning process and market analyses, and derives the outlines of a 20-year vision for the Bridge Street Corridor. Download the Report.